The Washington Post has an article about the slow demise of editorial cartoons and cartoonists, because they are offending some readers and I guess in this day and age, newspapers need to hold on to all the subscribers they can. 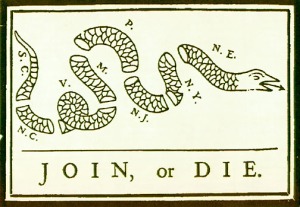 Ironically, the first cartoons in newspapers were editorial cartoons from way back – in fact the first one ran in, 1754! Yup, in Benjamin Franklin’s Pennsylvania Gazette. You may have seen it over the years, it’s right here, the “join or die” image, regarding the colonies.

I’m often concerned about losing followers or readers, not by what I post, but sometimes what they say – in the comments sections, mostly on Facebook and Instagram. I keep my mouth shut, but at times I want to argue. I have been known to delete some comments that are racist or stupid.

But it is interesting that a couple of complaints over a cartoon and newspapers would rather dump the whole editorial cartoon department rather than a subscriber or two. Which often makes me wonder since there isn’t the competition there was years ago. Most cities only have one newspaper, so there is nowhere else for a reader to go if they are in the daily newspaper reading habit.

I feel they are spiting themselves by unsubscribing to a daily habit that they have probably had most of their lives. It’s just so easy to just turn the page – sort of like turning the tv channel if you don’t like something, rather than complaining to the network.