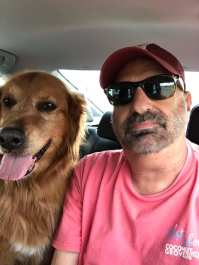 Last year, in the car on our way to The Hamptons for July 4th – Molly & me. 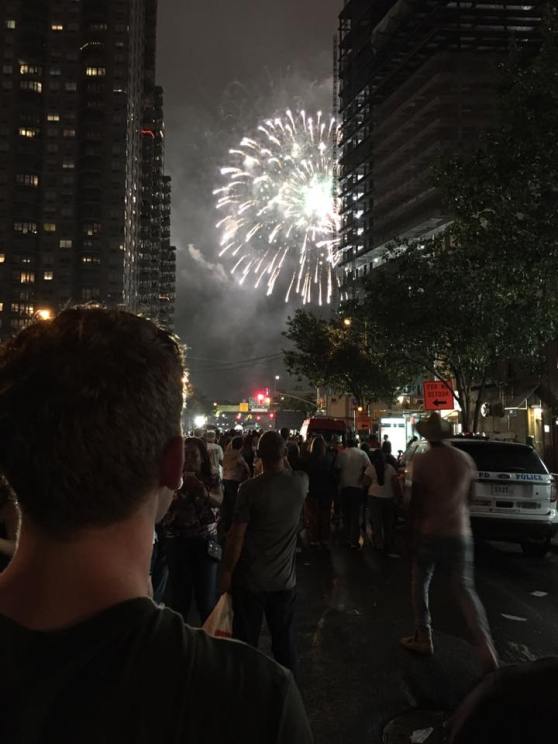 I didn’t like being alone for July 4th though. I normally would be in NYC, actually, The Hamptons, with my cousins. These photos are from a couple of years past in NY. I usually do the Nathan’s Hot Dog Eating Contest and at times have watched the fireworks from Manhattan when not in the Hamptons.  This one picture of Molly and me, in the car, on our way to The Hamptons last July 4th, is one of my favorite pictures. Molly is my aunt and uncle’s dog.

On Facebook yesterday, one of my memories popped up from three years ago – it was a little video I posted from a crowd at Long Island City, where I went to watch the fireworks over the East River, with Manhattan in the background. I don’t know how to save it and post it here or I would. There were literally tens of thousands of people there – all on top of each other. Wonder if that will ever happen again. I remember all of us trying to get on the subway back to the city after the fireworks – the crowds were backed up all the way up the stairs into the street. The same thing happened one year in lower Manhattan, near city hall, where the fireworks were over the Brooklyn Bridge.

Will we ever be in crowds like that again?

Anyway, one of my cousins called me early yesterday morning to tell me that it was still on – that everyone was driving out for the day. No one was sleeping over. They are all being quite careful in New York due to the coronavirus and that’s why New York went from having the highest rate, down to the lowest.

I guess I didn’t have to be alone, but I chose to be. I could have been with family, as our town and even my neighbors weren’t doing anything, but I know my family was doing things – boating, barbecuing, etc. Yesterday was the 14th day of me sort of self-quarantining after being at a family party 14 days before.

I didn’t want to say anything, but I was at this party for my nephew’s 2-year-old daughter along with maybe 50 other people. And not one person had a mask on and there was no social distancing. While it was all family, a lot of the people I didn’t know from his wife’s side of the family, maybe 50% of the people there – and they insisted on shaking my hand – even when I would pull it away, they would grab my hand! And my sister-in-law’s mother, who sees me all the time, insisted on hugging me – three times throughout the day!

So for 14 days I was freaking out – counting down the days until I was safe. Last week, a week after the party, my family had pizza night. I didn’t go and I explained why and they respected that, which was surprising, because in the past they would have said something like, “Get off your ass and get over here!” But they respected my decision.

Anyway, I spent July 4th alone. I didn’t like it. Hopefully next year it will be back to normal. Not the “new normal,” the old normal.