These old comic strips from the 1980s and 1990s are not bad, the gags are quite funny and the drawings could use a little tightening up, but they are good.

I was going through some old comics I did in the mid-90s. And I found some from the 1980s, too! I don’t know if I ever submitted them to the syndicates, I used to like the process and the journey, rather than the final destination back then. I would draw and enjoy the process but not send the work in.

I did find a bunch of comics that King Features published in the mid-90s as part of a comic called “The New Breed,” where they were grooming new cartoonists for something bigger and better. But I quit in the middle of it all when my business took off, I didn’t have the time; the road not taken. I regret that now.

Anyway, I found an old letter from King Features and I don’t think I noticed it at the time, but there was a handwritten note that said that they loved my single panel comics and they wanted to buy them at will a few at a time for “The New Breed,” but as a regular feature it lacked a look or style. They said it was “generic.” Their words. They said I didn’t have a unique style for the characters. I wish I had noticed it back then or at least remembered that as I would have worked on my style for single panel cartoons. So to that end, I am thinking of reviving “Paws,” my comic about Tombo the Rabbit and Jacomo the Mole. People loved it when I published daily, I even had a large dedicated audience on Instagram.

Paws is a single panel comic, which I love because I find it interesting and fun to do the gag in such a small space, without dragging it out through panels and in these days of social media, I feel that the single panel is easier to see and read on things like cell phones and tablets. 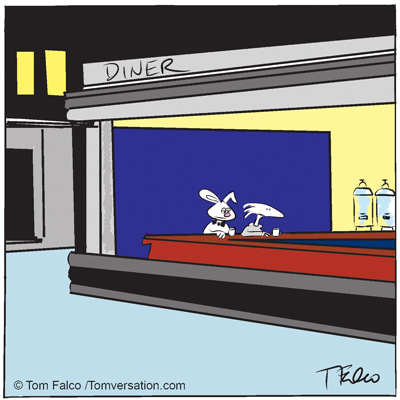 Tombo and Jacomo in my version of Nighthawks.