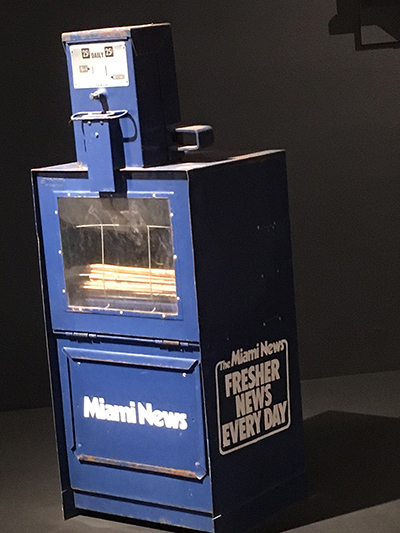 I was at Miami’s history museum last week, HistoryMiami and I saw this. Sad. An old Miami News newspapers box. Strange to see it in a history museum, but it is history. It was there in the museum along with old Pan Am airway stuff and Miami Vice things and stuff that you really don’t realize are part of history because they are not that old, but then again, yesterday is history.

I like the “fresher news every day” on the side of the box. They were the afternoon paper, the Miami Herald is the morning paper, so I guess The News did have fresher news. But then again, in the morning, The Herald had fresher news . . .

They had the last issue of The Miami News at the museum, it was just there. I wanted to pick it up and thumb through it but didn’t know if that was permitted, but it wasn’t under glass. It was just there.

The last issue was printed on December 31, 1988. I saved that issue and have it somewhere.

I’ve never been the Newseum in Washington, DC, but I bet they have a bunch of these boxes there. I can sort of picture a big area where they are all lined up – The New York Mirror, The Philadelphia Bulletin, The Los Angeles Examiner, The Tamps Tribune and so on.

I like a feature that the Newseum website has, they show today’s front pages of the nation’s daily newspapers.

2 thoughts on “The Miami News”