We spent Saturday in Southhampton, NY, one of the Hamptons at the eastern end of Long Island. They had a Christmas parade and tree lighting with fireworks. Something so special in this small, quint town.

People crowded the parade route by the thousands, they hung out of bars with drinks, all bundled up from the cold, mind you.

Then there were fireworks behind the tree for about 15-20 minutes. So much fun. Small town America during the holidays! 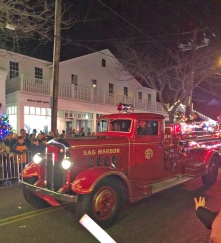 One thought on “Holidays in Small Town America”