I saw this ad on Facebook on some site that shows old ads. It brought back so many memories. My mother used to give us Chocks when we were kids. After all these years, this one ad made the memories come rushing back.

A while back, I saw an ad for a Fred Flintstone and Dino toy, and that brought back a floods of memories from playing with this at my grandmother’s house. I had seen the ad on Ebay and then a year or so later (just last month), I saw it at the Museum of the Moving Image in New York, along with all those long forgotten toys and items. That’s it below, Fred riding Dino. I can see it in my mind’s eye, on the floor, walking along, in front of the refrigerator at my grandmother’s house in Brooklyn.

Something that I collected a few years ago are those old Flintstone glasses. We used to have those when I was a kid. Welch’s Grape Jelly came in them and then when the jelly was gone, you had the glass.

I saw a bunch on Ebay and bought them from different people over a period of time I must have a couple of dozen now. I didn’t realize they were so small, about 4 inches tall, but my mother tells me that she liked them because they were small. She says they were perfect for small children.

I have one jar that still has the jelly in it! I bought it on Ebay, too. Originally it was 29 cents, the label is still on the jar. What happened was a lady in New England closed her small grocery store in 1965 and just left everything as is. Years later when someone bought the store and went in for the first time, it was a time capsule of 1965. And this jelly jar came from that.

An original Welch’s grape jelly jar from the early 1960s. 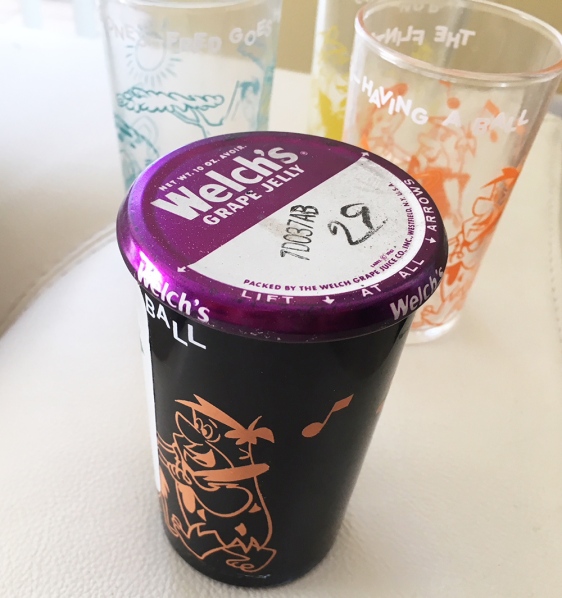 Some of my large collection of original 1960s Flintstone glasses.

2 thoughts on “Chock full of memories”

This I’d like to hear . . . #truck #car #drive #tree #whoops #woops #crazy #upatree
SUBSCRIBE
to this blog. Click here
NOTE: You will receive a confirmation email to finalize the subscription. Please look for that in your spam folder if you do not receive it right away. Thanks.