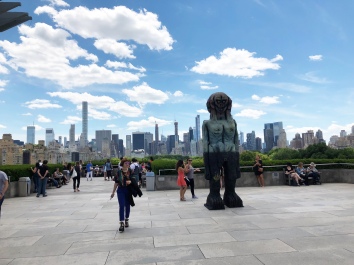 Beautiful views from the Met’s rooftop

I met my cousin Michael at the Metropolitan Museum of Art today in New York. He texted me to tell me he would be there – drawing. He was with a friend and he said they both do that together – draw. You may remember Michael was the one who took me around the Spider-man exhibit that time at the Society of Illustrators.

It sort of reminded me of that time I came upon the school kids drawing at MOMA and I ended up doing a story for the Huff Post about that. In this case, I knew the artists.

I went over and it was nice. They took a break after awhile and we walked around exploring the new exhibits. What’s funny about that was that Michael marked his spot so he could go right back to it to continue his drawing in one of the sculpture courts. But when we went back there was someone in the exact spot – the resident artist! Of all the places in that whole huge museum, they resident artist sat in Michael’s spot! We didn’t say anything, we just went on to look at more exhibits.

We are supposed to go to the David Bowie exhibit this weekend at the Brooklyn Museum, but I canceled to go to The Hamptons instead. Priorities. Guess we can go to Bowie next week.