I was watching a show called TasteMakers yesterday and it featured an escargot farm in the North Fork of Long Island, NY. One of my favorite places – the North Fork, not the farm, although I love that, too. You can watch that episode here. Notice the scenery of the area – the farms, the Long Island sound, the villages.

Most people prefer The Hamptons, especially in the summer, but where I live in Miami it’s like The Hamptons, 365 days a year – so I prefer the New England-y feel of the North Fork, which is different than my normal life. 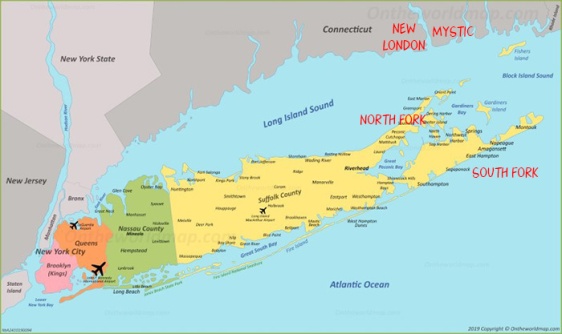 Long Island is shaped like a fish and the tail, the east end, has “two forks” – North and South. You can see here how close it is to New England, rather than NYC. That inlet just above the North Fork, in Connecticut, is New London to the left (west) of the inlet and Mystic to the right (east). Also, one of my favorite areas. The Cross Sound Ferry, is a car ferry which takes you  over the Long Island Sound, from New London which goes to Orient Point, the tip of the North Fork on Long Island. It saves driving all the way around, through Manhattan, The Bronx, and Queens and the rest of Long Island to get to the eastern end.

Anyway, there’s a place that was shown on TasteMakers regarding the farm called the Peconic Land Trust. The conserve and protect land on Long Island – 13,000 acres, which are farmed and protected from development.  23 acres are shared by farmers who are new to farming and want a place to get started, so they may be given an acre each to do their thing and try their hand at farming. The Trust encourages and helps working farms and farmers.

If it wasn’t for the cruel winters out there, I would love to live on the North Fork of Long Island. I’ve written about Riverhead before, one of my favorite towns on the north fork.

Related story: 48 Hours on the North Fork of Long Island