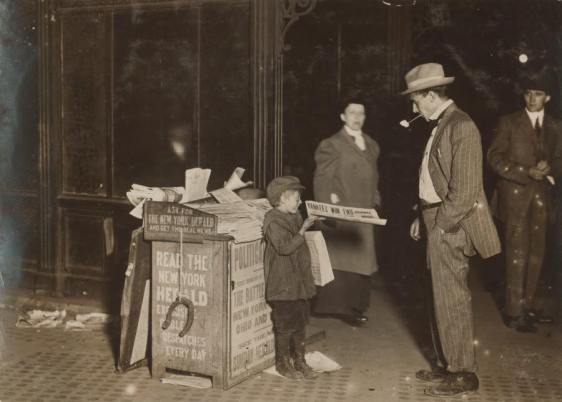 Look at this photo. It’s Broadway in NYC, in 1902. I can stare at this photo for a long time and just sort of fall right into it.

I have to find another template for this blog so that the photos appear larger (if you click on the right mouse button and hit “open image in a new tag” it will open much larger), but anyway, look at the one guy closest to Santa. He looks to be about 25 or 30 years old, perhaps born in 1872 or 1875 and at the prime of life – dapper, cool, looks like he has money. I like how his pants cuff falls onto the shoe. And now he is gone. Dead.

This period in time captured here and “alive” forever, yet everyone in the photo is gone.

This looks to be near Macy’s. Isn’t that the New York Herald in the back left?

I just got off the L train. I met my cousins in Ridgewood, Queens, and took the L from Union Square to Myrtle-Wyckoff Avenues. Ridgewood is the new up and coming neighborhood in New York. There was SoHo, then the Lower East Side, the Meat Packing District and Williamsburg and now it’s Ridgewood. The L train is the train into Hipsterland, but not so long ago, it was the link between Manhattan and a working class Brooklyn.

As  I took the train this time and usually when I take the L train, I think of days past, days before my time, and I think of the ghosts of the subway and the Brooklyn neighborhoods that we pass through. Bedford, Graham Avenue, Lorimar Street, Montrose Avenue and so on. They are names from my past, you see my father and his sister and their mother (my grandmother) and a lot of our relatives lived here so many years ago. I picture them in Brooklyn 1945 and thinking of them on this same subway line. The trains of course, were different and they called it the BMT, (Brooklyn Manhattan Transfer), my aunt told me Saturday – they changed it later to the LL, rather than L, to differentiate it from the EL, which was the elevated train. But it was the same route, the same stops and even the same tiles on the wall that spell out the stations. Those same exact tiles were seen and perhaps touched by my father and grandmother 70 and 80 years ago.

I had an old aunt, who in the 1980s, told me about the first day the line opened in 1905 and how that first week the rides were free to the public; they were a nickle after that. She told me of her first hand experience, remembering it vividly, she must have been seven years old at the time. I read a book once called “When Brooklyn Was the World.” That’s the time period I think of as I ride the L train today. To me the train is “The footprint of a lost world,” a quote I got from Anthony Bourdain.

Now as I ride the line I see hipsters who have taken over the neighborhood. There they are with their ipods and iphones and skateboards and beards and manbuns and fedoras; acting all cool and as if they have discovered something new. Do they ever think about the people who were there before them? Probably not.

It’s the same with all the train lines in the city, there is so much history, but visiting Graham Avenue and Lorimar Street and Bedford, as a child and hearing so many stories of my father’s childhood, it makes me think of all those ghosts of times past. My mother grew up near Coney Island, so those train lines have meaning too, but I don’t take them as often as I take the L train. I think of my father taking the train to Ebbets Field, or my grandmother taking him to the doctor’s office or visiting relatives, in a time that was much simpler.

People have come and gone, but the subway lines are still running, on the same routes on the same tracks, among all those ghosts of happy times past.

Here is an old film of the 1905 subway in New York. It isn’t the L line, but you can get the idea of the time period.