Lee Salem passed away earlier this week. I had conversations with Lee about cartooning and also Jay Kennedy, both heads of the big cartoon syndicates – Lee ran Universal Press Syndicate (now known as Andrew McMeel and GoComics.com) and Jay ran King Features.

In the mid 1990s I had sent them my work and they both liked it and both engaged with me. In other words, I didn’t receive form letters of rejection, which is usually the case, they were both nice enough to reject me personally.

In Lee’s case, he felt that my work was too much like The Far Side, which I believe had just ceased publication around that time. Today there seems to be many panel cartoons in that vein, but I guess right after Gary Larson left the scene, they didn’t want copies cropping up. I didn’t realize I was doing the same thing, but I must have been influenced enough by Gary that I was drawing weird single panel comics. 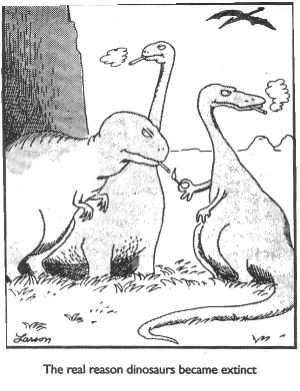 But look at this famous Far Side comic panel; still hysterical today, just as it was the day it was published. I felt it was a compliment to be compared to him.

I’ve always loved single panel comics. I’m not sure why, but I was always drawn to them more than comic strips. Maybe it’s the concise nature, where you only have the one space to tell your story in the most economic way. I’m really not sure. I still love Hazel and Charles Addams, Out Our Way, They’ll Do It Every Time, Flubs & Fluffs, Dennis the Menace and so many more. But that’s not to say I don’t enjoy comic strips, but I do find myself drawn the less wordy ones, so maybe that’s why I like panels; they’re less wordy.

In Jay’s case, I remember receiving a personally written note from him, I have it somewhere and I’ll share it some time when I find it, but he encouraged me to continue my work and he asked to buy some of the current submissions and for the next few years I was part of “The New Breed,” which featured single panel cartoons by various cartoonists each day.

I would send the syndicate a bunch, maybe 20 or 25 at a time and they would purchase maybe five of them. They would send back the ones they wanted edited (change this word, move that shading, things like that) and I would make the changes and send the comic back and it was published in about 300 daily newspapers a few weeks later. Many who are published today started cartooning for The New Breed feature. It was a way for them to groom cartoonists before the internet.

I regret not continuing with them after a couple of years. I had started a business and that took off and I guess I became too busy to continue with the comics on a regular basis. A less than smart decision on my part at the time, although I’ve lived a very good life thanks to my business.

I’m ready to start publishing again. I’m preparing comics for daily publication, I keep going back and forth between a strip and my single panel Tomversation comic, which I tend to love more.

One thought on “My brush with cartooning greatness”