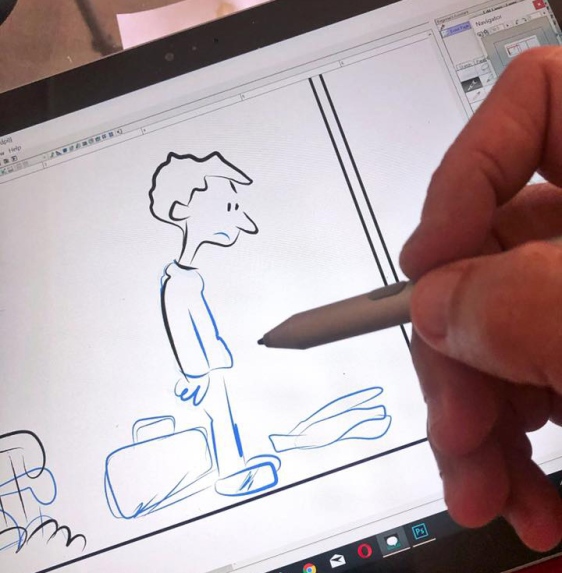 I’m working on my comic strip Hal and High Water, and hopefully will start publishing daily, but I have an idea that I’ve been considering. And that’s taking breaks, sort of having seasons, with breaks in between.

I know, I didn’t even start yet and I’m talking about taking a break! But listen, seriously. What I mean is, cartoonists work 365 days a year, they never stop, they never get vacations and if they do they have to build up that time by working extra hard to get a backlog of comics so that they can take time off. But what if the comic ran for a month or two or three and then there was a break, sort of like a tv show. The comic runs, ends with a cliffhanger, takes a month off, and then comes back for a new “season.”

A webcomic can do that very easily not so much a newspaper comic. But why not?

What if a newspaper comic ran for three months, then took time off and in that time another comic ran? What if three or four comics took up one space in the newspaper – sort of like the old days with tv, when a show would take the summer off and there would be a summer replacement. Years ago, that was the norm on tv and these last few years it’s been like that where there are not many reruns, other shows take up the time slot and there are usually three tv seasons now in a year.

I’m thinking of doing that with Hal and High Water as a webcomic – running it for a period of time and then taking a short period of time off. Hopefully the readers will be there upon its return, but a good cliffhanger may be needed for that – sort of like a “Who shot JR?” cliffhanger.

I had written once about switching up my own comics over the year – run a panel cartoon for a few months, then a comic strip, then something else, but that would defeat the purpose of having time off. It would allow me to publish my different ideas and features over time, but it would not give me time off.

So I’m toying with the idea of taking breaks during the year – yes, even before I started publishing.

One thought on “Can a comic strip have seasons?”