The Daily Cartoonist recently had an article about the younger generation not being aware of past comic references, like when Pete Buttigieg was compared to Alfred E. Neuman, many younger people had no clue what that meant, or Andy Capp was referenced on a late night show and it went flat, younger people didn’t know Andy Capp.

I find this interesting because when I’m cartooning, I try to think in my head about the audience. Who is my audience? I go back and forth. I make references to things in the past but more often than not I refer to current things that the older audience doesn’t understand. That was common when I published daily a few years back.

I would use a current term associated with today’s youth and the readers didn’t have a clue. But then I realized that perhaps it is because of where I was posting. It was basically a site read by older folks, people who actually hold the newspaper in their hands and read comics and news! 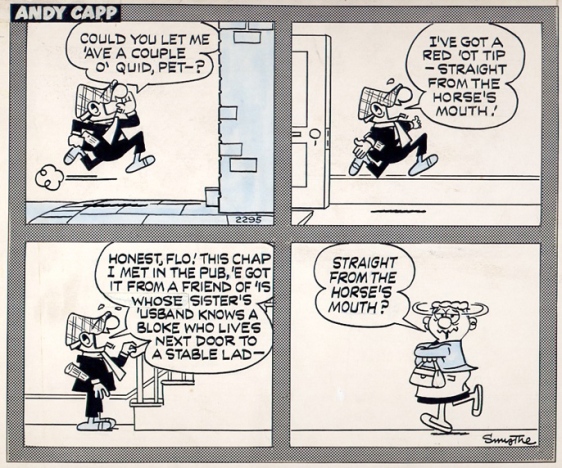 Andy Capp and his wife Flo.

When I start publishing Tomversation on May 4th, I will publish on my own website, but also I will publish on Facebook here and Instagram here and I assume that most of the readers on those platforms will be younger more than older, although Facebook seems to be out of favor with the younger crowd, but they still like Instagram.

So it will be interesting to see which group accepts my work more, or which group understands and gets my work more – not that it’s anything too complicated, but I do make references that will be from the past or more current, the spectrum that covers my knowledge and age I guess. But I’ve always liked the fact that not everyone gets a comic. I feel when that happens it’s an inside joke.

I didn’t understand this Tiger King thing that was going around – the memes and stories and things people were saying and posting online, so I looked it up and I’m all caught up now; not with the show, but knowing what Tiger King is about and how he fits into current pop culture.