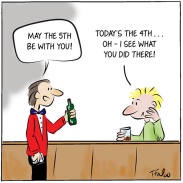 one of the final 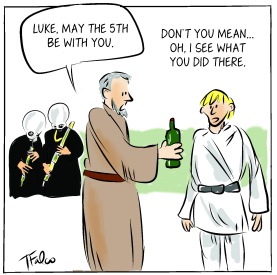 I added the musicians

So I published two weeks of Tomversation comics. Love the feeling, it brings back memories of years ago when I published daily. I am good with deadlines, I published the daily news in our neighborhood for 15 years, published daily comics and also printed and published things for so many years, including school newspapers that I guess every day is a deadline for me.

Anyway, the first comic, the “May the 5th be with you,” started out differently and I changed and redrew it many times. The day before it was to be published I started playing with it. You can see some of the incarnations here. There were more with changes related to these.

These are the finished ones, after I thought I was done and ready for publication, then I went back and moved things around and in some cases just redrew from scratch. You know, when I had Obi-Wan Kenobi handing Luke the bottle in the one drawing, I was wondering why is he just handing him a bottle in the middle of nowhere. Then I thought of the bar and added a couple of musicians, but still it wasn’t right.

I didn’t want to end up drawing that chaotic scene in the small panel I had to work with, so I ended up with the two of them at the table with Chewbacca and I did leave out Han Solo, who I believe is at the table, too. It was just too busy for everyone and everything.

This is what I love about single panel cartoons, too. You have that space and you have to make best use of it. Some guy mentioned on a social media site that the cartoon is a copy of some meme. I don’t remember seeing the meme, but that is the one thing I don’t like about single panel cartoons, it seems that everything has been done before. I’m guessing the “5th be with you” part is what he is referring to in the meme, not the whole bar set up, etc. But this is my concept, from my brain and that’s how it came to be.

Anyway, as you can see, first it was just a bartender and a guy in the bar, then the bartender ended up with a Darth Vader mask on then it ended up being the wookie bar or whatever that is on Star Wars and on and on and it finally because what it is.

I usually take 45 minutes to an hour to complete one panel cartoon, this one took six to seven hours with all the re-draws and changes!

This is how it rains in Florida. It could be raining over my house and across the street, it could be dry as a bone. You literally can see the line/wall of rain where it starts and ends. #rain #weather #summer #friends
SUBSCRIBE
to this blog. Click here