I did this interview with Stephan Pastis a few years ago. For a long time I did a bunch of 10 With Tom interviews for the Huffington Post. I’m thinking of getting back into doing that. Anyway, here is Stephan.

I got the chance to ask Stephan Pastis, creator of the comic strip, Pearls Before Swine, my Ten With Tom questions. Stephan has one of the most popular comic strips around, his tipping point was when Scott Adams, creator of the Dilbert comic strip, noticed his work and mentioned it in a blog post. The rest is history. His online readership went through the roof overnight.

He won the 2015 Reuben Award for best newspaper comic strip. I’m trying to follow in his footsteps with my comics, so it truly was an honor doing Ten With Tom with Stephan. 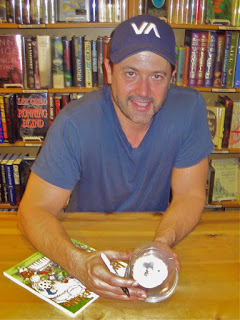 Do people mistake you for Seth Macfarlane?

I’ve heard that before, but the one I hear more is Robert Downey, Jr.  I even had a restaurant owner in Dublin, Ireland tell me what an honor it was to have Robert Downey, Jr. in her restaurant. I told her that I appreciated it, but that I didn’t like to be disturbed while dining.

Are you recognized on the street?
Almost never. Except as Robert Downey Jr. in Dublin.

What are a few of your favorite classic newspaper comics from your childhood?

Flintstones or Scooby Do?
Scooby. There’s always someone trying to scare away prospective house buyers by filling it with fake ghosts and/or monsters. Knowing that the ghost thing is a sham, I could probably get a great deal on real estate.

Which comic strip would you like to crawl into and spend the day?
Krazy Kat. Lots of peyote and throwing bricks at others.

Dick Tracy or Little Orphan Annie?
It wouldn’t be Annie. Her lack of pupils would be disturbing, particularly if you fell in love. You could never look into her eyes.

What section of the printed daily newspaper today should be eliminated to add more comics?
Many of the comics.

Do you think you’ll ever go digital in creating Pearls Before Swine? Why?
No. Too lazy to learn. Plus, it doesn’t seem like something Robert Downey Jr. would do.