A few friends shared this video on Facebook. It shows what graphic design was like before Adobe Illustrator was around. I remember the press down letters, but this wasn’t that long ago, was it? They make it sound like ancient history.

I remember using the letters for a bag company I worked for, I think I told the story before, I used to do the graphics for a paper bag company. At times I didn’t have the typeface I needed on our Compugraphic or Varityper machines so I would purchase the type on sheets and press them onto the graphic I was working on. 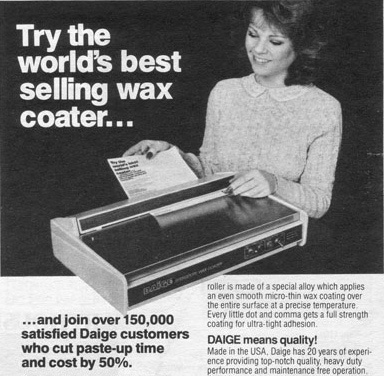 Compugraphic and Varityper, I haven’t thought of those names for years. They were huge machines where type came out sort of on reverse film, black on white. Then we waxed the back using a “waxer.” There was a machine with a roller, called a “waxer,” and it waxed the back of the film and it then was placed down where needed. And of course xacto knives and razor blades were in our hands at every moment. I preferred razor blades to xacto knives.

It was all “pasted-up” to make a complete page, image, advertisement . . .

It was all to get the work “camera-ready.” Yes, the stuff was all then shot with cameras and plates and negatives were made from that. Now camera ready means Kendall Jenner posing for Instagram.

I remember I could look at any typeface and know the name of it and the point size it was, just by eyeing it.

I remember in the 1980s when one of my bosses told me that “pagination” was coming in the future. This is where the whole page would come out as one piece. At that time we did the headlines as one piece, the text in columns as another, the photos  were stripped in later in the camera room and there were so many steps to getting just one newspaper page done. I remember thinking that he was kidding, how could it all come out as one piece?

I also remember asking my brother Chris one time if it would be possible to typeset on computers and have different typefaces for different jobs. He said it was probably possible but something would have to be programmed into the computer to get that effect as it wasn’t something that was done at the time. I remember standing in his kitchen in the 1980s having that conversation with him like it was yesterday.

Am I dating myself?

2 thoughts on “Graphic design in the ‘old days’”