I started following a page on Facebook that is all about The New York Daily News Sunday papers. Mostly the comics and thrown in are some old images and comic from the New York Mirror.

What I like about it is that as you scroll down, you feel as if you are reading the actual comics pages at the time. Three comics stood out that I had forgotten about but when I saw them here it brought back so many childhood memories for different reasons.

The reason I remember Louie so well is Silly Putty! I distinctly remember picking up this comic by pushing Silly Putty onto it and then taking up the image. Like this image shows below.

I don’t know why Louie stands out, because I’m sure I did this with all the comics, but I distinctly remember picking up Louie with Silly Putty.

I liked Pottsy because it was funny, but also it was New York. He was a NY cop and the scenes clearly depicted New York. This top comic is obviously Coney Island and the one below clearly shows City Hall in lower Manhattan. I was just there a couple of weeks ago. 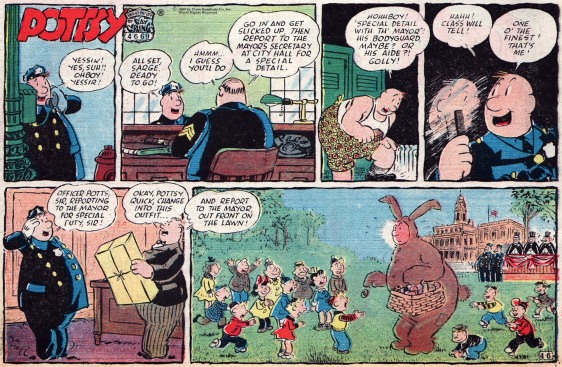