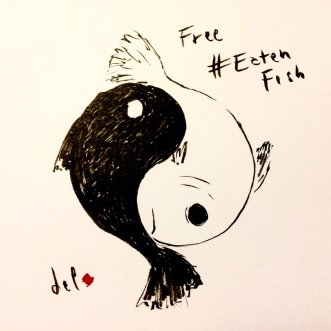 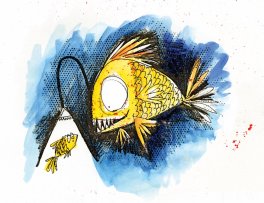 Ali cartoons under the name Eaten Fish. Cartoonists, starting in Australia, and now all over the world have been drawing fish cartoons and posting them on social media in the hopes of drawing attention to the detention.

Australia detains people who seek asylum if they arrive by boat. Talk about wet foot, dry foot. Ali is detained on Manus Island. Ali’s health is failing and people all over the world are asking for his freedom.

I have collected some of the EatenFish comics that have been making the rounds.

Cartoonists Rights Network International (CRNI) writes: “It is with profound alarm and sadness that [we] learn that our friend and colleague, cartoonist Mr. Eaten Fish, currently held in an Australian refugee rendition camp in Papua New Guinea has decided to undertake a hunger strike. He is a man who has given up hope, cannot struggle any longer, cannot face the future that is being forced on him, and he would rather die than submit to the indignities of further inhuman treatment.”

The Australian government has been petitioned many times both from within Australia and internationally asking that Eaten Fish be brought to Australia for medical treatment.

More in this issue here.

This I’d like to hear . . . #truck #car #drive #tree #whoops #woops #crazy #upatree
SUBSCRIBE
to this blog. Click here
NOTE: You will receive a confirmation email to finalize the subscription. Please look for that in your spam folder if you do not receive it right away. Thanks.